Miró the Sculptor: Elements of Nature

May my sculptures be confused with the elements of nature, trees, rocks, roots, mountains, plants, flowers… — Joan Miró

New York, NY, January 6, 2020 – Acquavella Galleries is pleased to present Miró the Sculptor: Elements of Nature. Late in his storied career characterized by a lifelong love of experimentation, Joan Miró dedicated himself to sculpture, working initially in ceramic before making works which were cast in bronze. The artist created over three hundred bronzes between 1966 and his death in 1983. Unflagging in his aim to explore and redefine the medium of sculpture, at age 81, Miró shared his enthusiasm with his friend Alexander Calder: “I am an established painter but a young sculptor.”

The 23 bronzes on view in Miró the Sculptor: Elements of Nature date from 1966–1975, the decade spanning from the creation of the artist’s first monumental bronzes through the opening of the Fundació Joan Miró in Barcelona. The works focus on some of the artist’s most significant subjects, including abstracted birds and metaphorical portraits of women incorporating found objects such as wooden boxes, rocks and stones, a high chair, and shoes.

Miró first explored three-dimensional objects in the late 1920s and early 1930s—when, inspired in part by Surrealism, he spontaneously combined everyday objects into a series of revolutionary constructions and peinture-objets. In 1949, Miró found a new direction that would galvanize his sculptural practice and further root his sculptures in the natural world. One day, while walking near his summer home in Mont-roig, he came across a rock which he reimagined as a head and had cast in bronze, making his first objet trouvé. Miró began imaginatively and spontaneously combining his found objects with clay modeling to create assemblages, transforming the elements into poetic and suggestive sculptures that would be cast in bronze.

A fully illustrated hardcover catalogue will accompany the exhibition and will include a critical essay by the artist’s grandson, Joan Punyet Miró, who works as an artist himself and manages his grandfather’s estate. Placing the works in the context of where they were created, the installation will feature photographic murals of the Mallorcan seaside and the family home outside Barcelona in Mont-roig where the artist spent summers until 1975. The farmhouse, including Miró’s preserved studio, opened to the public last year.

Joan Miró (1893–1983) was born in Barcelona and studied at the Barcelona School of Fine Arts. His work before 1920 shows wide-ranging influences, including the bright colors of the Fauves, the broken forms of Cubism, and the powerful, flat two-dimensionality of Catalan folk art and Romanesque church frescoes of his native Spain. Miró went to Paris in 1920, where he met Pablo Picasso and fell under the influence of the Surrealist poets and writers. In his mature style, Miró drew on memory, fantasy, and the irrational to create works of art that are visual metaphors of surrealist poetry, paintings that became known as peinture-poésie. These dreamlike visions, with gestural abstract signs and symbols as well as written words, have a whimsical quality but also appeal to an art of the spirit. Miró returned to Spain in the 1940s. Though he continued to work in the free and spontaneous manner established in the 1920s, the artist challenged himself by exploring new materials. For several years in the 1950s he stopped painting, working on paper and in ceramics. His late work includes many sculptures, mixed media paintings, drawings, prints and ceramics. 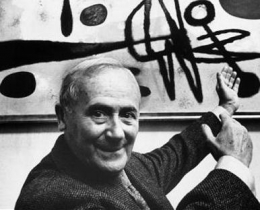