EARLY INFLUENCES
Fernand Léger was born into a peasant family in Normandy, apprenticed to an architect, and then went to Paris in 1900 to study painting. He settled in Montparnasse near artists such as Marc Chagall, Robert Delaunay, Henri Laurens and Chaim Soutine, and learned the lessons of the Parisian avant-garde. His early work in Paris was in a style that mixed Impressionism with Fauvism, but quickly came under the influence of Cubism.

THE MACHINE AGE
Léger depicted an expanding industrial world, employing his own form of dynamic Cubism in paintings dominated by contrasts of color and forms. During World War I, Léger served in the front lines. He said these experiences strengthened his sense of reality and reinforced his interest in modern mechanical forms he knew from guns and airplanes. After the War and his return to Paris, Léger's paintings seem to be inhabited by machine forms and robot-like figures, all rendered in primary colors. Few 20th century artists accepted industrialization with as much enthusiasm as Léger, and his painting celebrated the modern city and the machine.

PEOPLE AT WORK AND PLAY
By the late 1920's, Léger had an international reputation, and was especially sought out in the United States for his work that exalted in modernity and the modern city as the path to the future. During the last twenty years of his life, Léger concentrated on a few basic themes in which he summed up theories about people and the contemporary industrial world. He painted divers, cyclists, construction workers and circus themes in the series La Grande Parade. He was in New York from 1940-1945, painting murals and teaching, and in the 1950's, he had a number of large mural commissions, including one for the United Nations. 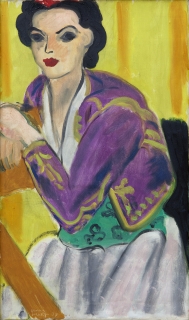 The Path of Modernism
From Impressionism to Today January 8-March 15, 2019, Open Monday - Friday, 10 am to 5 pm
View Exhibition
Back To Top