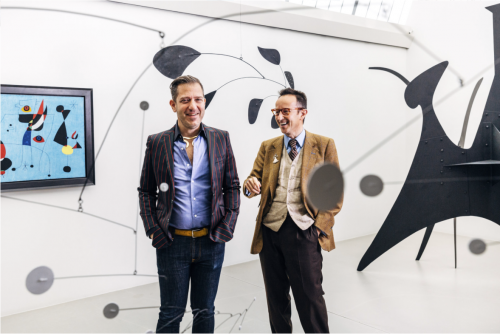 Joan Miró was a small, fastidious, taciturn Catalan. Alexander Calder was a big, rumpled, gregarious American. At first glance, they would appear to hail from distant planets. Yet once they met in Paris in 1928, they enjoyed an unusually close and mutually beneficial friendship that lasted until Calder’s death in 1976. With other artistic pairs, like Pissarro and Cézanne or Picasso and Braque, competitiveness ignited and acrimony at times soured the creative ferment. But Miró and Calder unfailingly championed and nourished each other’s work. A principle that Calder applied to his art could also describe their relationship: “Disparity in form, color, size, weight, motion, is what makes a composition.”

Really, though, there is no explanation for what drew the men together, conversing over a lifetime in heavily accented French. “The communion that existed between Calder and Miró was mystical,” says Joan Punyet Miró, the artist’s grandson.

That’s why, Mr. Punyet argues, the two men, though separated by an ocean and the disruptions of World War II, were able to create bodies of work, both eventually called “Constellations,” that mutually resonate with such power. And now, today’s art lovers can judge for themselves. In a rare convergence of art dealers and heirs rather than artists, Acquavella Galleries and Pace Gallery have combined to show the Mirós and the Calders in “Calder/Miró: Constellations.”

To reunite all 23 of the Miró “Constellations” — a series of small paintings on paper, begun in 1939 in Normandy and completed in 1941 — would be a particularly dazzling coup. They have been exhibited together as a complete set only once, almost 25 years ago, in the Miró retrospective of 1993 at the Museum of Modern Art.

“They are one of his greatest achievements, if not the greatest,” said Anne Umland, a curator of painting and sculpture at MoMA. “For concentrated intensity and the essence of Miró’s spatial, poetic, cosmic genius, they are as good as it gets.”

Calder’s “Constellations,” although not such a career zenith, constitute a significant chapter in his career. Having made his international debut in Paris with the mechanical “Circus” of the mid-1920s and then with his mobiles, Calder became celebrated for kinetic sculptures. Although that was hardly all he did — he introduced “stabiles” in 1937, and also made jewelry, paintings and works on paper — he nonetheless surprised himself when his “Constellations” opened at the Pierre Matisse Gallery in New York in 1943. He remarked that “it was a very weird sensation I experienced, looking at a show of mine where nothing moved.”

An unusual stillness also characterizes Miró’s “Constellations”: The silence of the cosmos. When he began the series, Miró was anguished. The fascists under Franco had occupied Catalonia early in 1939, and soon afterward overturned the Spanish Republic that Miró and his friends supported. He retreated to Varengeville-sur-Mer, a village in French Normandy. He brought a pad of modestly sized watercolor paper — 15 inches by 18 inches. Tearing off a sheet, he rubbed it with oil and gouache, over which he laid an intricate pattern of biomorphic, brightly colored forms and curling black tendrils that he strung with small shapes.

Eyes gaze, lips open, cats smile, nude women luxuriate and dancers cavort in these lustrous firmaments. He worked on each for about a month, studying the completed paintings as he composed a new one. He informed his dealer, Matisse, in February 1940 that “even though the formats are small, they give the impression of large frescoes.”

In May, the Germans began bombing Normandy. As the Mirós fled first to Paris, then to Perpignan, Barcelona, Palma de Mallorca and finally to the family farm in Mont-roig in Catalonia, Joan’s wife, Pilar, took charge of their small daughter, Dolores, while he carried the satchel that held his precious works in progress. As the series advanced, the more menacing forms of the earliest paintings gave way to beatific images. In Palma, where Pilar’s parents lived, Miró would spend some mornings listening to organ music and admiring the stained-glass windows in the cathedral. “In negating negation, I affirm,” he later declared.

Miró finished his “Constellations” in Mont-roig in September 1941. Not long after, at his studio in Roxbury, Conn., Calder fashioned a collection of sculptures in which hand-carved wooden forms, some painted, others not, were held in place by metal spokes. Consulting with Marcel Duchamp and the curator James Johnson Sweeney, Calder called them “Constellationes,” adding a mysterious final “e” to create an idiosyncratic coinage.

During wartime, milled aluminum, which Calder customarily used, was commandeered for airplane production. Though he had access to metal, Calder chose to go with wood, to signal his support for the troops. (He had tried but failed to enlist in the Marines.) Shown in 1943 at Pierre Matisse, in what would be his last exhibition there, the sculptures in many instances were displayed up high, suspended from the ceiling or attached to a wall. A critic in The New Yorker praised their “truly starry sharpness and clarity.” Calder himself said they suggested “some kind of cosmic nuclear gases — which I won’t try to explain.”

Trapped in Spain by the war, Miró couldn’t see Calder’s work. Two years later, MoMA helped him smuggle 22 of the 23 paintings in his “Constellations” series out of wartime Europe in a diplomatic pouch, and the Pierre Matisse Gallery exhibited 16 of the works at a time. Miró wrote that the show “should not be considered as a simple artistic event, but an act of human import,” because these paintings were “realized during this terrible time when [the fascists] wanted to deny all spiritual values and to destroy all that man holds precious and worthy in life.”

The 1945 exhibition caused a sensation in New York art circles. Indeed, some critics believe that the “all-over” style of painting that Jackson Pollock adopted in 1947, extending his forms over the entire canvas without conferring priority to any one area, came in response to seeing the Mirós.

Even though he used “constellation” in the name of one of the paintings in the series, Miró did not refer to the group that way; but by the late 1950s, the Mirós, like the Calders, became known under that rubric. It is natural to think of the two bodies of work, created in the same period, as linked.

To display them together, however, posed nearly insuperable challenges. Marc Glimcher, whose family-owned Pace Gallery represents the Calder estate, concluded that his firm might be able to round up many of the Calder “Constellations.” But only the Acquavella Galleries — which, with the backing of Sotheby’s, acquired the holdings of the Pierre Matisse Gallery (including 550 Miró oil paintings) after Matisse’s death in 1989 — could possibly gather the Miró counterparts.

Because the Miró and Calder works are fragile, securing the loans was difficult. “There were lots of ‘Noes,’ and many phone calls,” said Arne Glimcher, Marc’s father. It became an amicable rivalry between the two galleries. Once Acquavella reported — prematurely, as it turned out — securing all the Mirós, Pace scrambled even harder.

It helps that while the galleries are friendly competitors, the two heirs who control the artists’ estates are, like their grandfathers, purely friends. They met in 1995, when Mr. Punyet, who was studying at New York University, noticed a letter in a gallery at which he was interning that had arrived from Alexander S. C. Rower, Calder’s grandson (who, like the artist, goes by the nickname Sandy). Mr. Punyet photocopied the return address and wrote to him. He didn’t know that Mr. Rower had been writing over the years to Dolores Miró in Palma, with no reply. Mr. Rower called Mr. Punyet upon receiving the letter, they met for dinner that night, and they have been close pals ever since.

They can empathize with each other’s position as few can. “I have so much responsibility leaning on my shoulders,” said Mr. Punyet, who is 48. He took on the burden after the deaths of his two older brothers. “I’ve got so much pressure — texts to write and books to publish,” he added. “My wife says, ‘Joan, you have to pull the hand brake, or you’re going to explode.’”

Mr. Rower, who is 53, has been coping with such tension since he established the Calder Foundation in 1987. “I felt there was an urgent need to make an archive,” he said. He observed that curators were drawing on just a few hundred Calder works when they assembled exhibitions, instead of considering the full 22,000 pieces his grandfather had produced.

A visitor to the two galleries, about a mile apart, can experience the “Calder/Miro: Constellations” as they were created — separately, but in sync. Miró was precise on how he wanted his paintings shown: in chronological order, on white walls, in simple frames. Acquavella honored those directions, except for the framing. Conservation requirements were too strict to permit the paintings to be uniformly remounted. Because one lender backed out at the very last minute, the Miro “Constellations” show comprises 22 paintings and one print.

The Calder “Constellations” are a looser body of work than the Mirós. Calder is thought to have made about 29, and Pace has complemented them with other pieces, for a total of 36 sculptures.

“It’s pretty amazing what they’ve been able to source, knowing how difficult it is to obtain these loans,” said Stephanie Barron, a curator who organized a Calder show at the Los Angeles County Museum of Art in 2013. “The Calder ‘Constellations’ are very approachable works. There’s a whimsy to them. They balance, but they don’t move. Some of them give the illusion of moving, but they don’t. You feel that if you waited long enough, maybe they would.”

None of the “Constellations” at either gallery are for sale, although such noncommercial megashows have a way of boosting an artist’s future prices. Marc Glimcher asserts that in addition to exploring artistic affinities, these two shows demonstrate that despite frequent reports of cutthroat competition in the art world, dealers can still collaborate.

“In the old days, there was an amazing fraternity of the people who made their life in art,” he said. And sometimes, when the stars align harmoniously, that spirit of camaraderie can return. 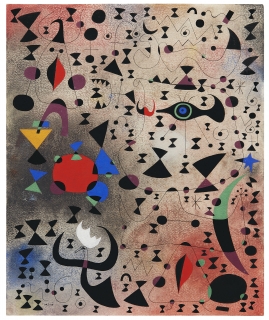 Calder | Miró Constellations
In collaboration with the Pace Gallery April 20 – May 26, 2017
View Exhibition 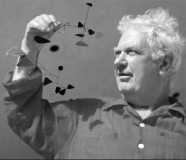 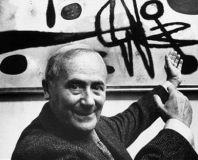